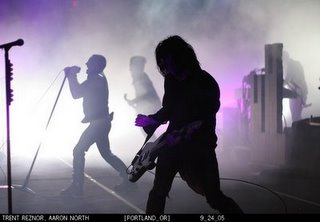 Nails' set was brilliant. They sounded deliciously crisp yet wielded the raw energy of an atom bomb. The new lineup played like pros, with Aaron North on guitar, Allesandro Cortini on keyboards, Alex Carapetis on drums and Jeordie "Twiggy" White on bass. North in particular was aflame, frenetically twisting and flinging his guitar while never missing a note of his scabrous solos. True to NIN form, he busted his guitar into kindling at the end of the set.

The arrangements on many of the songs were altered; "The Only Time" was appropriated during the bridge of "Closer," which fit surprisingly well in stripping the song down to an even more danceable beat. "Burn" was especially altered, the textural layers were stripped down during the verses to make the song less abrasive. Should a bootleg surface, I demand a copy. Every song sounded at least a bit tweaked from the studio version. The results were gorgeous.

NIN's set was also visually brilliant. During "Eraser," they returned to using the projection screen in front of the band, against which they displayed a video montage of the evolution of life on Earth (which naturally concluded with images of the war in Iraq and thus begging the question, how long does life on Earth have left?). The screen's viscous imagery during "Beside You in Time" made the band look like they were playing in an aquarium. And, lo and behold, the image of Bush onscreen during "Right Where it Belongs" received a suppressed chorus of 'boos.' I think the Canadian citizenry has grown largely indifferent to his violent sham of an administration. 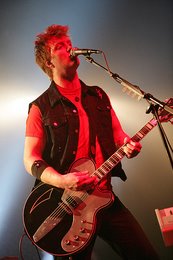 Queens' set was a bit disappointing; I really, REALLY didn't like their set choices (omitting "Go With the Flow," "Someone's in the Wolf," and "Monsters in the Parasol"). Homme was his usual strutting awesomeness and the new bassist was a tremendous asset on backup vocals.

DFA 1979 really rocked it out, but no one really cared.

NIN set list (approximate):
Pinion/Love is Not Enough
Don't You Know What You Are?
Terrible Lie
The Line Begins to Blur
March of the Pigs
Something I Can Never Have
The Frail
The Wretched
Closer
Burn
Gave Up
Eraser
Right Where it Belongs
Beside You in Time
The Collector
Wish
Only
Dead Souls
Suck
Even Deeper
Hurt
The Hand that Feeds
Head Like a Hole 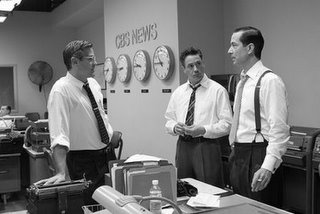 The decision to use black and white photography in "Good Night, and Good Luck" is kind of a no brainer. Follow the logic: archived footage of Wisconsin senator Joe McCarthy was to recur onscreen. This footage is in black and white. Thus the options were to either a) colorize the footage, b) refilm the footage altogether in color and with an actor portraying McCarthy, or c) film the rest of the movie in black and white in order to correspond to the McCarthy footage (as well as that of the humorous commercials that occasionally appear in the film). Option B was most unviable, as it would have eroded the documentary aura engendered by the presence of the McCarthy footage. Option A was a similar, though less drastic step from the authenticity of the footage. Thus, in choosing Option C and using the unadulterated McCarthy footage, Clooney is bringing the audience directly into the milieu of McCarthy, Murrow, and the fearmongering political climate of America in the early 1950s.

The smokey interiors and lithe jazz interludes set the scene with style, even averting the pitfall of desperately screaming, "Hey look, we're in the '50s!" The smoke especially underscored the oppressive insularity of the newsroom, which more closely resembled a war room wherein deadlines, factuality and clean records carried life or death ramifications (literally in the case of redbaited CBS anchor Don Hollenbeck).

Despite Clooney's wise stylistic decision-making, his truthfulness is a bit dubious. Here it is worth noting the actor's long-standing beef with resident Fox News Channel bully Bill O'Reilly. The actor's father being a news anchor is also of note. Clooney has stated that he is simply a Murrow mark, but in "Good Night, and Good Luck," it is difficult to separate his journalistic idolatry from his political leanings. Does Clooney simply quarrel with O'Reilly and love Murrow because, having been raised by a news anchor to appreciate the craft, he knows good journalism when he sees it? Is it just a coincidence that McCarthy and O'Reilly are right-wingers?

My first major problem with the film is its ostensible suggestion that Joseph McCarthy's downfall was largely fomented by Murrow's episode of "See it Now" in which the renowned newsman challenged public acquiescence to the Wisconsin senator's bullying of the baselessly accused and violations of their Constitutional rights. In fact, McCarthy mostly self-destructed. 'Ol Tailgunner simply made one high-profile accusation too many until the Army said, "Okay asshole, you done fucked with the wrong guy!"

Secondly, the conflict between Murrow and McCarthy is simply too black and white. Especially in today's terrorist climate, it should be easy to understand the hysteria that fostered the red scare of which McCarthy was more a symptom than a cause. Murrow acknowledges this fact briefly in the movie, but otherwise, no context is given for McCarthy's motives. His actions are indeed inexcusable, and if he was purely hungry for publicity, then so too are his motives. However, with Alger Hiss, the Rosenbergs, and any untold number of Soviet spies at work at the time, Tailgunner's motives deserve more qualification than that given by Clooney.

Lastly, although Murrow was perhaps the most high-profile of McCarthy's critics, he was by no means either the first or the last. The senator had been up to his red-baiting tricks long before "See it Now" took to criticizing his cause. In this respect I felt the film overly exalted CBS' bravery. Notwithstanding substantial personal and financial risk, they were merely sounding their voice higher than that of the small chorus already challenging the Wisconsin senator's tactics.

The most laudable theme in "Good Night, and Good Luck" is that of journalistic politics. Murrow's boredom while talking to celebrities, as well as the bookend speech about the state of news in America, help to underscore what may be Clooney's most imperative point: good journalism suffers as commerce. When ratings and advertisers are factored into the equation, the courage and vision of men like Edward R. Murrow are rendered moot. The audience doesn't care about political bickering as much as they do about saccharine puff pieces that aggrandize their favorite celebrities. This unfortunate aphorism of journalism is one Clooney clearly laments, as do I.

David Strathairn, as Murrow, is a work of stone-faced brilliance. With little more than a steely glance and a deadpan delivery, he exerts a tight command on the audience's sense of urgency.

My biggest gripe about "Good Night, and Good Luck" came in the form of the Robert Downey Jr./Patricia Clarkson storyline (two married employees of CBS news forced to hide their union from co-workers due to anti-nepotism rules). The vitality of the film absolutely flatlines when their flaccid subplot takes the screen. Though adroit in their own rights, the two actors have minimal chemistry together. The subplot's relevance to the film's story is highly tenuous; the strands are tied together by the act of hiding information about yourself in order to avert discrimination or prejudice. Whoop-de-whoop. The scenes still belong on the proverbial cutting room floor.
(photo courtesy of www.thezreview.co.uk)
# posted by David Riley Wilcox @ 6:55 PM ::