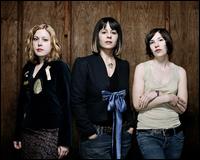 1. Sleater-Kinney: The Woods - Totally self-indulgent and totally awesome. The gorgeous instrumental sprawl of "Let's Call it Love" encapsulates the unrepentant attitude fueling Sleater-Kinney's approach to The Woods: strip it down, shake it up, and lay it bare. The blustery low-fi acoustics of "The Fox" immediately shatter any memories of the all-female trio's relatively more polished and accessible discography (think "Milkshake and Honey," "Rock and Roll Fun"). While the sonorous vocal hooks that beat at the core of Sleater-Kinney's body of work are plentiful across The Woods' eclectic landscape, grinding "What's Mine is Yours" to a halt mid-song in favor of a menacing and raggedy guitar solo is the kind of welcome surprise that catapaults this album ahead of past works.
2. New Pornographers: Twin Cinema - This Canadian musical monolith turned a pair of the most solid and consistently engaging pop albums of the past five years, Mass Romantic and Electric Version, into a triad with Twin Cinema. Though not a radical departure from the sound of either album, the life-affirming vibe of "The Bleeding Heart Show's" extended coda and the bare balladry of "These Are the Fables" allude to New Pornographers exploring ancillary musical areas outside of the high-octane pop of "Letter From an Occupant" or "All For Swinging You Around." Still, their M.O. remains: if it's catchy, it works - and on Twin Cinema, they don't try fixing it.
3. Decemberists: Picaresque - Being somewhat of an outsider to the indie rock scene, I didn't quite know what to make of the Decemberists prior to downloading Picaresque on a whim. The cannons-a-blasting charge of "Infanta" quickly drew me into their charming Romantic sensibility and led me through a collection of some of the most wistful ("Of Angels and Angles"), dour ("Eli the Barrow Boy"), and culturally incisive ("Sixteen Military Wives") songs of the year.
4. Bloc Party: Silent Alarm - Hype surrounding these British boys led me into Silent Alarm expecting more homogenized new wave revival dance pop a la The Killers. Then I heard the instrumentation. The drumming on Silent Alarm alone is worth the price of admission. Rather than serving the hooks, the rhythms stand on their own and frequently plunge into violent overdrive at will. Throw in some spacey guitar arrangements and the wails of vocalist/guitarist Kele Okereke (who sounds not unlike Damon Albarn of Blur), and you have one of the most lively albums of 2005. The best part is, you can still dance to it. 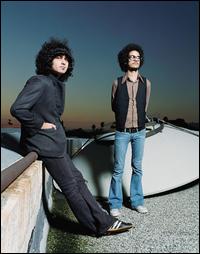