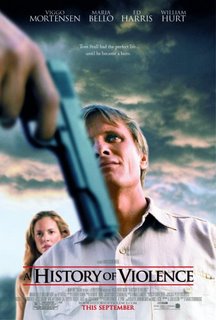 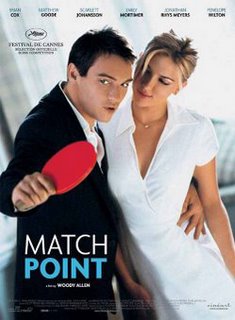 At the beginning of "Match Point," Woody Allen's 40th directorial feature and first set in London, Chris Wilton (Jonathon Rhys-Meyers) declares, "The man who said I'd rather be lucky than good saw deeply into life." While Chris' story and that of "Match Point" are deeply rooted in the play of luck and incidence, the triumph of Woody Allen's "Match Point" has little to do with either.

A failed tennis pro, Wilton lands a job as a country club instructor. He quickly finds a passage into the upper crust of English society when he befriends Tom Hewett (Matthew Goode), a tennis pupil. Wilton's affinity for the Hewett family balloons when, in a reveal that screams to be revered, he meets Tom's voluptuous girlfriend Nola (Scarlett Johansson). Although he entertains the affections of Tom's sister Chloe to the point of marriage and employment with her father (Brian Cox), Wilton's lust for Nola draws him into a never-ending juggle of comfort and passion.

The heritage of Wilton's character is quickly made explicit by Allen. Early in the film, Wilton is shown reading Dostoyevsky's "Crime and Punishment" on the sofa bed in his cramped loft. The parallels between Wilton and Raskolnikov (the novel's psychologically tormented central character) aren't completely laid bare until later in the film, when Wilton ends his balancing act with some buckshot and spends the remainder of the film learning to live with his massive guilt.

As luck invades the criminal investigation into Wilton's actions, Allen not only masterfully manipulates audience expectations concerning Wilton's fate but also invites one to ask: is luck something we should wish for? In the case of the accomplished Allen, the answer is a firm 'no.' 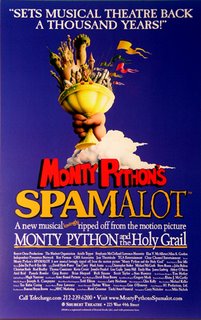 Although Broadway patrons are currently raising their medieval chalices in a toast to Monty Python's "Spamalot," those who have yet to visit the Sam S. Shubert Theater to see the unruly musical may be best advised to rent the musical's cinematic source material, "Monty Python and the Holy Grail."

In a disappointing lack of ingenuity, the bulk of "Spamalot's" best jokes are directly lifted from "The Holy Grail." "In the know" audience members who have seen the film greeted familiar bits by rapturously applauding the appearance of "Holy Grail's" most beloved moments, such as the Knights Who Say Ni and the homicidal bunny rabbit.

Hank Azaria, as the French Taunter (among other parts), took advantage of the room for improvement upon "Holy Grail" offered by "Spamalot." His depiction of the rowdy castle-dwelling annoyance launched the audience into a comedic coma. Furiously delivering his lines and spitting buckets while doing so, Azaria was a delight to behold. The lines themselves weren't even that audible.

The "Black Knight" bit deeply suffered from the film-to-theater transition. Using crimson paper tassles instead of geysers of fake blood to signify the Knight's hacked limbs greatly spoiled the bit's humorous value. In "Holy Grail," the Black Knight's calm refusal to surrender his duel to King Arthur in the face of lost limbs was hilarious in contrast to the raging action of his rapid loss of blood. Without that key ingredient, the bit seemed undercooked.

The feature additions to "Holy Grail" in "Spamalot," the musical numbers, were largely ho-hum. "Not Dead Yet" was an amusing expansion upon one of the film's best jokes, but the Lady in the Lake's self-referential numbers (such as "Once in every show there comes a song like this...") were fleeting goofs that couldn't last far enough to keep the songs fresh and fun. Of course any freshness or fun in "Spamalot" is limited if one has already seen "Holy Grail," and a cost analysis would certainly point to the better option.

The Squid and the Whale 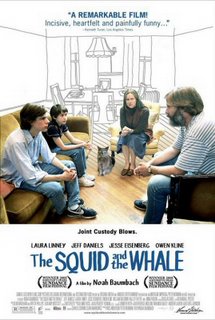 Divorce is hell. In the case of Frank and Walt Berkman, adolescent sons to Joan and Bernard in Noah Baumbach's "The Squid and the Whale," the tailspin following their parents' rancorous separation produces far more troubling consequences than two homes and frequent commutes between them.

Set in sunny 1980’s Brooklyn, Frank (Owen Kline) and younger brother Walt (Jesse Eisenberg) enjoy a financially modest but leisurely life as sons to two writers. As mother Joan’s (Laura Linney) literary success balloons and father Bernard’s (Jeff Daniels) prospective book deal falls through, so too does their marriage destabilize and dissolve. Piled onto their problems is Joan’s extramarital affairs and Bernard’s unrelenting intellectual pig-headedness. His ultra-competitive approach to the film’s opening familial tennis match - though initially in the vein of co-producer Wes Anderson’s brand of dry humor - ultimately adopts a dark and distressing significance when the plights of his children take hold and his corrosive influence upon them is revealed.

“The Squid and the Whale” is acted with self-possession and restraint, especially by the prickly Daniels and the irrepressible Linney. It ably balances the humorous idiosyncrasies of the Berkman family members with the psychological lacerations inflicted upon them by the divorce. Baumbach’s film will especially resonate with children of divorce, who are befittingly portrayed in a manner akin to victims of an emotional car crash learning how to walk again.