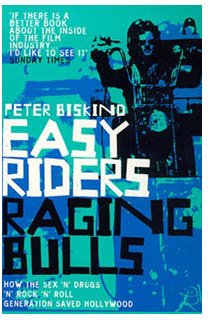 “Easy Riders, Raging Bulls: How the Sex-Drugs-and-Rock n’ Roll Generation Saved Hollywood” by Peter Biskind offers a reader everything he would expect from a 452-page gossip column. Its chronological account of Hollywood’s changing of the guard during the late ‘60s and ‘70s comes with a 100 gallon goodie bag of stories about Dennis Hopper’s lunacy, Faye Dunaway’s absence of charm and the unabashedly nerdy George Lucas. Contrary to the spirit of gossip, however, “Easy Riders” actually pierces the superficial skin of its subjects, although Biskind’s obsession with the juicy facts ultimately limits just how tightly he frisks the artistic ambitions of the harbingers of Hollywood’s second golden age.

The book begins with the journey of “Bonnie and Clyde” (1967) to the big screen as a result of star Warren Beatty’s collaboration with his longtime sycophant scriptwriter Robert Towne, director Arthur Penn, and screenwriters Robert Benton and David Newman. Biskind amusingly recounts Beatty’s difficulty getting Warner Brothers titan Jack Warner to finance “Bonnie and Clyde,” then and even now a ragingly anti-Hollywood film with an ending about as good-natured as a NAMBLA convention. Rumors persist that in order to get the deal, Beatty dropped to his knees and said “Colonel, I’ll kiss your shoes here, I’ll lick them.” Aghast at Beatty’s desperation, Warner yells “What the fuck you doin’? Get OFF THE FUCKING FLOOR!” Equally hilarious is the weak-bladdered Warner’s statement to Beatty after seeing the two-hour and ten-minute cut of “Bonnie and Clyde”: “That’s the longest two hours and ten minutes I ever spent! It’s a three-piss picture!”

But Beatty - and his ‘70s resume of films such as “Shampoo” (1974) and “Heaven Can Wait” (1978) - is only one of Biskind’s recurrent subjects. Dennis Hopper takes the distinction of being the most drugged up, unstable gun-loving lunatic ever to set foot in Hollywood, rivaled closely by suicidal “Taxi Driver” writer Paul Schrader. Perhaps the most amusing Hopper tale involves John Wayne, who flew his helicopter onto the set of “True Grit” and exited the vehicle with a holstered .45 and the “Easy Rider” star in his sights. Biskind explains that Wayne regularly scapegoated Hopper for any New Left or communist stirring happening at the time. In this instance Wayne exclaimed, “Where is that pinko Hopper? That goddamn Eldridge Cleaver’s out there at UCLA saying ‘shit’ and ‘cocksucker’ in front of my sweet daughter. I want that red mother fucker! Where is that commie hiding?” In actor Glen Campbell’s trailer, according to Biskind.

Hopper’s “Easy Rider” (1969) marks the next portentous step in Biskind’s tracing of the New Hollywood genesis, followed by such classic American cinema as Robert Altman’s “M*A*S*H” (1970), Francis Ford Coppola‘s “The Godfather” (1972), William Friedkin’s “The Exorcist” (1974), Steven Spielberg’s “Jaws” (1975), and Lucas’ “Star Wars” (1977). Meanwhile the rise - and in some cases fall - of directors such as Peter Bogdanovich, Martin Scorcese and Hal Ashby are told with dramatic punch and no compromise on the lurid details - namely those pertaining to Scorcese and Ashby’s self-destructive lifestyles and Bogdanovich’s fawning hero worship of Hawkes and Ford.

The anecdotal quality of Biskind’s writing makes for a devouring read. Savory dialogue in the screening rooms, mansions and awards ceremonies tells the stories of “Easy Riders’” subjects with a furtive flow. For a cinephile there is a bombastic thrill in not just reading but experiencing, as a third party, candid conversations between Hopper and Peter Fonda, Coppola and Lucas or DeNiro and Scorcese. The dialogue-driven tale of Robert DeNiro and his girlfriend quarreling over a swatted-dead bee at a restaurant in Cannes is among the most delightful stories in “Easy Riders” precisely because of its triviality.

A familiarity with the characters of Biskind’s book considerably enhances its readability. Someone who couldn’t care less about Hollywood history may read about Hopper’s fiesty altercation with Rip Torn at Serendipity in New York City with unmoved apathy. Thus “Easy Riders” is firmly indoctrinated in the cult of celebrity - it assumes we care about its subjects enough to read with profound interest about Bogdanovich’s infatuation with Cybil Shepard or Bert Schneider’s platonic love for Black Panther leader Huey Newton. For film lovers and industry insider-wannabes these stories will provide guilty pleasures galore. But at the other end, fanatical film purists who especially care about the films themselves and little else may get anxious reading about all the extraneous gossip.

Despite all its delightful detail, Biskind’s book glosses over a massive tidbit: the films themselves. Because “Easy Rider, Raging Bulls” focuses primarily on the economic and social conditions of Hollywood in the late ‘60s and ‘70s its focus on the artistic merits of key films of the period is a bit shallower. With abundant detail Biskind depicts Hollywood as a parasitic playground of greedy egos but its products are treated as just that - products. In “Easy Riders” their grosses and distribution patterns take precedence over their contribution to the American cinematic canon. He doesn’t ignore their artistic merits, but it is clear throughout “Easy Riders” that Biskind is concerned more with product than art. Iconic New Yorker film critic Pauline Kael receives a smattering of Biskind’s attention but her role in the New Hollywood genesis is mostly confined to an economic one - most notably, her weighty role in the box office success of “Bonnie and Clyde.” The space devoted to her actual responses to films is somewhat smaller than Biskind’s account of her critical clout and her personal relationships with filmmakers like Beatty.

“Easy Riders, Raging Bulls” reads like cotton candy tastes. But between its compelling tales of Hollywood careers gone awry and those gone aflame, Biskind’s book teases a taste of the artistic essence of the New Hollywood renaissance. Nevermind asking why we care about the subjects of the book; the true question arising after every chapter of “Easy Riders, Raging Bulls” is why we care about the films. As an inevitable consequence of recounting the raunchy drama of New Hollywood Biskind comes pretty damn close to answering these questions, but its clear throughout the book that he’d rather explain why Dennis Hopper is a psychopath. 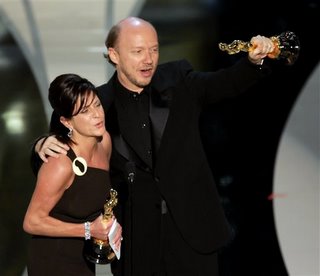 Search my February archives for my thoughts on this year's Best Picture Oscar winner. Search my January archives for a list of 15 films that were more deserving of that award than "Crash" (and I can recite an additional 15 films upon request).

It seems the common explanation for this Oscar upset is that Hollywood is trying to set the American social agenda - telling people that "Crash" is good, they should see "Crash," they should soak in its strike-a-melodramatic-pose visuals and its muddled message that people hate, but also love, but also hate, ad infinitum. "Oooh, we're such numb and lost souls that we crash into each other - that's awesome stuff, man. That's what we'll call the film. And hey - let's include a car crash just to make our fists all the hammier." And when it comes to the movie's leave-no-questions-asked, squash-the-imagination-like-a-fucking-bug storytelling, don't get me started on the revelation that there were blanks in the gun.

I attribute this madness to the Academy's desperation for ratings. Indeed, this year's ratings appear to have slipped 8% from 2005. Next year the sloganeering for the show will be sure to include something to the effect of, "You never know what's gonna happen at the Oscars! We may just go completely loony and give the Best Picture award to 'Mission: Impossible 3!' Even though it's not nominated!"

If this tomfoolery does result in a ratings spike, it will come at the expense of a significant chunk of the Oscars' credibility. I'm sorry Academy, but the sky just isn't purple this time.