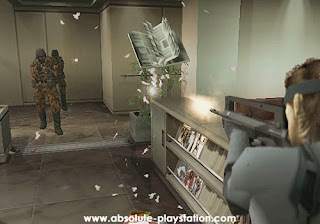 But in “Metal Gear Solid 2: Substance” for the PlayStation 2, that balance is lost. And the spill isn't too pretty.

Solid Snake returns in the game's prologue to infiltrate a ship transporting the newest model of Metal Gear, the walking nuclear tank with the power to wipe out nations. After that mission concludes in chaos, the player continues the remaining bulk of the game two years later as Raiden, an androgynous upstart spy for Snake's old unit, FOX-HOUND. Raiden provides a stubborn, emotive and - in the eyes of some players - girly complement to the grizzled resolve of Solid Snake.
But considering the overblown story surrounding him, Raiden's behavior is suitably bewildered. In “Substance,” he is plucked from virtual training missions and sent to Big Shell, a massive water purification plant, to rescue the president from another host of terrorists threatening to unleash a nuclear holocaust.
That's the premise. But the plot that follows would require every page in this paper to recount. For every 10 minutes of game play, there seems to be another 15 of cut scenes and radio conversations chronicling enough double-crosses, hidden agendas and secret bloodlines to weary Tom Clancy. Raiden learns that the terrorists who kidnapped the president are targeting the Patriots, a shadow government with designs of world domination through digital censorship.
Keeping track of the allegiances of the president, mercenary Olga Gurlukovich and arch-villain Revolver Ocelot may prove the most puzzling challenge in the game. By the time of its finale, even the internal logic connecting its events is gone due to a Manhattan destruction scene's removal during the game's post-Sept. 11 completion.
Much of the dialogue is plainly boring and bloated by philosophical musings about the elusiveness of truth and the democratization of information - issues you may not be willing to pontificate on while parked in front of a TV. Snake and Raiden's frequent one-word question responses to others' ramblings are further signs of faulty writing.
When “Substance's” story isn't unraveling like an overcooked spy thriller, players can enjoy the refined stealth action of an otherwise pleasant game. Enemy soldiers, cameras and mines again dot the hostile territory Snake and Raiden must cross to complete their missions.
But the protagonists are aided by several new abilities. Through a new first-person aiming system, enemy soldiers can be held up at gun-point for ammunition and health items. When a soldier spots your character, you can snipe his radio to stop him from calling for backup. If you subdue the soldier, you must carry their carcass out of sight should more soldiers show up when their comrade doesn't check in.
The direct result of these new facets of game play is heightened realism and a more rewarding stealth dynamic. There are still moments when a soldier will stare in your direction from 20 yards away without detecting you, but they are otherwise more plausibly alert to your presence. The new skills of “Substance” - which also include leaping forward mid-sprint, climbing atop boxes and clinging to catwalks - challenge a player's resourcefulness while checking their patience like previous “Metal Gear” games.
The infiltration segments of the game do not balance with its boss battles as masterfully as in “Metal Gear Solid,” but the battles themselves are mostly well-imagined. There is another surface-to-air missile showdown with an aircraft, and another struggle against the mammoth Metal Gear - many of them.
Raiden must tend to ticking explosives while trying to stop the roller-skating mad bomber Fatman with precision shooting, then later provide cover fire in a sniper challenge that cleverly twists the duel with Sniper Wolf in “Solid.” But terrorist leader Solidus Snake is beaten too easily in the final battle through swordplay abruptly introduced late in the game.
No part of “Substance's” play tops the ingenuity of the clash with psychic Psycho Mantis in “Metal Gear Solid,” but the fourth wall collapses more often in the sequel. At one point, Raiden's superior tells the player to press the reset button. The “mission failed” screen is flashed mid-fight in a later set piece. Lacking the ingenuity and dark humor of Mantis' antics, as well as the context of an absorbing story, these moments instead feel gimmicky and frustrating.
Only a few other issues pop up in the play mechanics. The game's cameras, which usually pan along one axis in three-quarters bird's eye position, sometimes obstruct a critical view of Snake or Raiden as they prepare to pounce on or sneak past a foe. Climbing atop boards and leaping over railings may require a few attempts because the character tends to lean his back against the surfaces when close.
As part of “Metal Gear Solid: The Essential Collection,” “Substance” includes some throwaway bonus missions and skateboarding side quests onto the disc as distractions. With substantial story editing, the game itself could have earned its “Essential” status, instead of sneaking away with it.
If you play
Game: “Metal Gear Solid 2: Substance” (part of “Metal Gear Solid: The Essential Collection”)
Score: 85 out of 100
Parental rating: Mature for blood and gore, partial nudity and violence
Publisher: Konami
Director: Hideo Kojima
Platform: PlayStation 2
Price: $29.99
Features: 1 player
Life span: 10 hours
The final boss: “Substance” recaptures most of the excitement in its predecessor's stealth play while overstuffing its cinematic side to the point of ridiculousness.
(Published April 17, 2008 in The Citizen)
# posted by David Riley Wilcox @ 11:46 AM ::