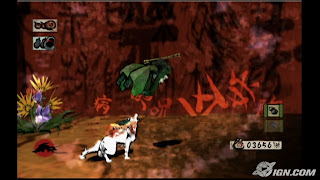 When Capcom ported "Resident Evil 4" to the Wii, it seemed likely that "Okami" was next in the publisher's line of last-generation games to find new life on the Nintendo system.

The highly praised PlayStation 2 game met with meager sales due to its arrival during the system's twilight years. On the Wii, a new and more attentive audience could discover "Okami" and give the game a rightfully warm reception.

But what really beckoned "Okami" to the Wii was the game's unique style of play. Fewer game play elements are better suited to the Wiimote than the game's Celestial Brush - a directionally controlled ink brush with which players can slash at enemies, turn night into day or plant bombs simply by drawing on screen. On the PS2, these actions were accomplished by pushing an analog stick with one's thumb. So one would suspect that miming these strokes with a Wiimote would be much more fun.

But "Okami's" controls don't work on the Wii quite as beautifully as the game's breathtaking art. Players can accomplish most brush commands with ease, but every so often an action takes half a dozen attempts to execute. The slash command in particular is sometimes a pain to achieve due to the difficulty of precisely waving the Wiimote in a straight lateral motion across a tree or an adversary. Most players will adjust to this problematic control within an hour of starting the 40-hour game, so it ultimately presents a minor hassle.

Another control downgrade arises during combat, when wolf deity Amaterasu must rid the Japanese countryside of the demonic beings that haunt it. The hero's attack and dodge actions have been mapped, respectively, to flicks of the Wiimote and nunchuk. This scheme slightly slows the pace of the game's frequent battles - sometimes to the point of mental and physical tedium - from the button-mashing frenzy they became in the PS2 edition.

These downsides to the Wii edition of "Okami" don't detract too heavily from what is otherwise a brilliantly inspired game. As the white wolf sun god Amaterasu, players must use the Celestial Brush to stop a plague of darkness that has beset feudal Japan. The muted Amaterasu travels the countryside with the motormouth Issun, a microscopic guide, to aid villagers and add new powers to the Celestial Brush in hopes of slowly repelling the curse of the eight-headed demon Orochi.

The story is advanced with occasionally boring cut scenes - namely the 10-minute-plus opening - but the playful dialogue and absorbing characters that occupy Amaterasu's adventure liven up the interludes.

"Okami's" Japan is presented in endlessly vibrant cel-shaded color that vivifies the setting to the point where players may feel content to simply run around as Amaterasu and take in all the graphic splendor. In this area "Okami" benefits from its adaptation to the more powerful Wii, which depicts the game's swirls and explosions of color and light in sharper graphic detail than the PS2. The wall of flame that encircles Amaterasu in battle is saturated with billowing textures and brilliant hues, while the water bodies and skies cool the screen with tranquil waves of blues.

Between the aesthetic and the mythic sweep of "Okami," players may feel like they're participating in an epic cartoon of the finest artistic quality. Though the PS2 edition offers a somewhat easier control system, the game's glory is preserved well enough on the Wii to warrant another play-through. And those entirely new to the game would greatly enjoy picking up the brush. 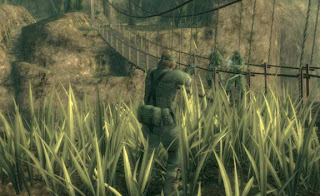 The 2004 installment of Hideo Kojima's landmark stealth series (revised in 2006 as "Subsistence") was a potent shot of adrenaline after "Substance" left players exhausted by puzzling storytelling. "Subsistence" not only reinvigorated the series with a more digestible and scaled back plot, it drastically refined its game play as well.

As Naked Snake - the genetic predecessor of long-time "Metal Gear" protagonist Solid Snake - players parachute into the Russian jungle in the early 1960s to rescue a nuclear researcher from the Soviets before he can complete a doomsday weapon for their army. From the time period to the soulful, if over-the-top opening song to the curvy charms of femme fatale EVA, the game has all the makings of a James Bond movie.

Many of the cutscenes are marred by the voice acting of David Hayter as Naked Snake, which sounds like he swallowed gasoline before he spat his lines. It's still somewhat tough to absorb the tale due to its abundance of secret agendas and double crosses between the U.S. and Soviet sides. But lacking the philosophical musings of "Substance" and their intolerable length, "Subsistence's" story plays out with much more intrigue.

The game play receives a major refreshing due to the introduction of a camouflage system. In Snake's arsenal are several outfits and face paint color schemes with which he can blend into the game's assortment of environments, from the overgrown foliage of the jungle to the copper-colored mountainside.

Replacing the map players used to keep Snake out of his enemies' sights is a percentage index at the top of the screen indicating Snake's degree of invisibility. The result of this switch is a stealth dynamic that slows Snake's advance and requires more attention to his surroundings in order to discern the proper path through them.

Simply running through the minefields of patrolling guards is no longer possible, players must often lie in wait and survey the scene from a safe hiding place as soldiers loom inches away. Though this game play model may test one's patience at first, it ultimately rewards in heavier doses through its heightened realism and suspense.

The camouflage system of "Subsistence" is also to be credited for its most exciting boss battles. The first finds Snake in a sniper fight with an elderly master marksman simply named The End. Spanning three massively detailed forest maps, the battle can take more than an hour to complete as players scour that landscape for signs of their well-hidden foe. Snake, meanwhile, must cloak himself in the lush forest or fall under the fire of The End's tranquilizing darts.

The resourcefulness, calm and strategy demanded by this duel easily ranks it among the finest boss battles in video game history. As the fight ensues players may curse The End and the game itself, but they'll probably want to face off again they've conquered him.

The second standout boss battle is at the game's actual end, against Snake's mentor and paramour, The Boss. On a much smaller battlefield blanketed by white lilies, Snake must evade the hand-to-hand attacks of his more skilled enemy by hiding in the massive flower bed and catching her off guard. The remainder of the game's boss fights are a bit too easy and unimaginative, but mildly fun at a minimum.

Another plate to balance in the boss battles is Snake's health, which is handled in an entirely new way in "Subsistence." Players must remedy each wound with proper care through a medical interface. The game also adds a stamina meter, which Snake must replenish through food captured in the Russian wilderness or else face dizzied aim and coordination. The relentless doting on both life bars is another dose of realism that livens up "Subsistence" with its new difficulties.

By reinventing the "Metal Gear" series' stealth play and paring down the prominence of its story, "Subsistence" surpasses its immediate predecessor but still comes up a bit short of the ingenuity and brilliant design of "Metal Gear Solid." However, the third "Solid" leaves plenty of hope to subsist on prior to the June release of "Metal Gear Solid 4."