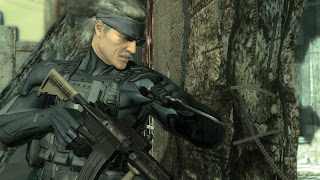 With wary eyes the game imagines nations waging proxy wars through private mercenary companies in the not-too-distant future. As battles rage, businesses reap the rewards of this “war economy” like players in a slaughterous stock market.

The (supposedly) last chapter of Hideo Kojima's mythic stealth action series places an older Snake on battlefields across the globe in this grim future. With little time left until his weakening body fails him, Snake sets out to eliminate the boss of these war-mongering businesses: Liquid, Snake's fellow clone and arch-foe of “Metal Gear Solid,” who plots to topple the U.S. government.

Tracking Liquid across the Middle East, South America and other diverse war-torn locales takes Snake to their front lines, where Liquid's forces face off with rebel troops in chaotic scenes of explosions and dying screams. As a third party passing through the combat, Snake can complete his missions in myriad ways. “Patriots,” like previous “Metal Gear” titles, lets the player choose how badly they bloody their path.

Sneaking past soldiers and leaving them alive demands patience and alertness, but the inherent thrill of successful stealth in “Patriots” rewards every second spent lying in wait for the coast to clear. This tactic is aided by a few new toys, such as Snake's OctoCamo suit, which can automatically adopt the colors and patterns of its surroundings. It does so when Snake presses up against a surface, an action that was cleverly mapped to its own button. This control removes a small trouble of previous “Solid” games, where trying to perform context-sensitive actions like climbing and hanging off ledges would sometimes line Snake's back against a surface instead.

While playing dead - another fun new trick - players can sprawl on the ground, faintly visible, and stick up a patrolling soldier as he approaches. The Close-Quarter Combat controls are tweaked with tremendous success. Manipulating a captured enemy - sticking him up, interrogating him, knocking him out or killing him - is far more manageable than in previous “Solid” games. Foes lying in wait around a corner are also susceptible to the Metal Gear Mk. II, a tiny wheeled scout robot that can not only electrocute enemies but also provide Snake a helpful picture of the path before him. The last of these welcome stealth upgrades is the Solid Eye, a mechanized eye patch that empowers the player with night vision and binocular views to ease Snake's scouting. This tool also strengthens the parallels between the older Solid Snake and his father, Naked Snake, the one-eyed protagonist of “Metal Gear Solid 3” who would become “Metal Gear” foe Big Boss.

Other new game play facets include Drebin Points, a deep but slightly superfluous form of currency for purchasing and customizing firearms, and the psyche meter, a measure of Snake's mental well-being. When exhaustion, discomfort or depression siphon this bar, the player experiences the effects in the form of slowed movement and unsteadied aim. This elegiac substitute for the hunger system of “Metal Gear Solid 3” expresses the deterioration of the elderly Snake even during game play to heighten his pathos with the player.

The other strategic option players face in “Patriots” is mowing down the soldiers who would do the same to Snake if they spot him. Pushing up the body count poses a more direct risk to the hero's health, but it spares the player the time-consuming process of careful sneaking. With a new first-person perspective that allows movement while aiming, the gun play of “Patriots” achieves remarkable smoothness that mirrors the vast improvements to its stealth play. Finding parity between these two tactical approaches to the game in terms of both accessibility and pure fun is an astonishing feat on Kojima's part.

His masterful design of “Patriots” widens the player's range of possible ways to advance through it. The maps - particularly those in the Middle East, South America and Prague - are much larger in scale than those of previous “Solid” games. In countless patterns players can weave themselves within their brilliantly varied topography, whether it's the tiered cliffs and sinuous streams of South America or the roofless maze of homes in the Middle East. Snake may ignore about 80 percent of an area in a single play-through, even though these environments invite players to savor every splendorous detail. Kojima thus uses the beauty of the game against the player, as lingering to look exposes Snake to enemy eyes.

Another new wild card in the game play is the battling armies occupying Snake's surroundings. He may ally himself with the rebel soldiers by killing their mercenary foes, and in doing so free himself of danger in the native forces' presence. The firefights between the sides have their advantages, such as the muffling of Snake's footsteps and the plentiful items left on fallen soldiers. But the action can also disrupt the play. A player may take time carefully positioning themselves to pounce on an enemy when the soldier is suddenly cut down by gunfire. In addition to its frustration, this dynamic of “Patriots” can rob Snake of his agency and almost cast him in a supporting role in his own game. In the midst of the Middle East chapter's undeniable resonance with an at-war American public, this particular aspect of the game echoes the absence of control the playing audience may feel for its soldiers abroad.

When players aren't engaged in the trademark tactical espionage action of “Patriots,” they're placed in wonderfully imagined action set pieces that range from third-person shooting in an abandoned and blown-apart Middle Eastern hotel to a rail shooter aboard a motorcycle in Prague. Even the stealth creatively shifts in tone when Snake tracks a kidnapped ally through the labyrinthine South American hills, and later trails a fellow trench coat-wearing gentleman through the misty streets of Prague in a scene strikingly reminiscent of film noir classic “The Third Man.”

The exciting pace of the action sustains itself with excellent boss battles, most of which pit Snake against the thunder-voiced shellshock victims of the Beauty and the Beast Brigade. Their animalistic metal exoskeletons encase females whose sex appeal is eclipsed only by their madness. All four fights achieve a mixture of frenetic strategizing and modest terror, but puppeteer psychic Screaming Mantis ably tops her cohorts in both of these areas.

Like previous “Solid” tales, the story of “Patriots” unfolds between bouts of game play in several lengthy (some top an hour) cut scenes chronicling a dizzying amount of double-crosses and secret agendas. Despite the indigestibility of all its details about nanomachines and artificial intelligence, “Patriots” succeeds at building sympathetic characters whose relationships form a weighty emotional touchstone in the story. By the time Snake lifelessly crawls toward the game's climax in a beautifully desperate moment, players will surely rally him on as they beat on the triangle button to continue his advance.

To much delight, “Patriots” reintroduces major players from previous “Metal Gear” games like a reunion TV special. But their roles feel organic to the plot, not indulgent or superfluous. At least one gasp or cheer at the sight of a character is likely to sound from the living room of “Solid” fans during their first time through “Patriots.” Players new to the series may find themselves less swept up in the mythos, but the skillfully directed scenes should leash their attention while they wait to continue.

“Patriots” also leaps far beyond its predecessors in the pure cinematic quality of its cut scenes. A fight between “Metal Gear Solid 2” foes Raiden and Vamp shames any big-screen showdown in the ingenuity and kinetic beauty of its choreography. A shootout between “Metal Gear Solid” characters Meryl Silverburg, Johnny Sasaki and hordes of enemy soldiers harkens back to the screwball comedies of Tracy and Hepburn with their sharp repartee in the face of mortal danger.

Such filmic moments are helped by facial animations that betray the subtlest of emotions, be they Dr. Naomi Campbell's ambivalence about her dashed alliances or Otacon's sorrow at seeing his friend Snake age away. The Hollywood caliber voice acting finds its finest example in the nomadic arms dealer Drebin, who speaks with a salesman's relaxed charisma in a role that could easily have been sunken by overacting.

Gorgeously next-generation graphics and a score of epic scale - highlighted by Snake's poignant stringed theme - polish off the overall package of “Metal Gear Solid 4: Guns of the Patriots.” “Metal Gear Online” extends the game's endurance with its robust shooting play. As arguably the first major exclusive title for the PlayStation 3, “Patriots” provides the mightiest of anchors and should weigh heavily on the minds of any prospective system buyers. Kojima's brilliant design and direction ensures that Solid Snake doesn't merely sneak into video game history, he passes on with all the glory befitting his iconic place in that history. His exit is the one change in “Patriots” players may not be quick to embrace.

If you play Game: “Metal Gear Solid 4: Guns of the Patriots”
Score: 98 out of 100
Parental rating: Mature for blood, crude humor, strong language, suggestive themes and violence
Publisher: Konami
Director: Hideo Kojima
Platform: PlayStation 3
Price: $59.99
Features: 1 player, online
Life span: 20 hours
The final boss: “Guns of the Patriots” lands “Metal Gear Solid” on the next console generation with numerous improvements to its well-imagined stealth and shooting game play, as well as a spectacle of a story laden with rich characters and stunning action.