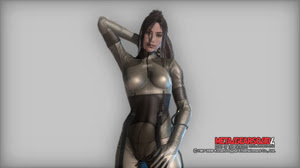 The cinematic scale of "Metal Gear Solid 4" shames previous attempts to merge movies with games - even Director Hideo Kojima's own. The sharp script is realized by Hollywood-caliber voice acting, particularly from Christopher Randolph as Hal and Khari Payton as Drebin. The facial animations and body language of characters like Snake and Meryl convey emotions with amazing subtlety. Images of the scenes Kojima conceives - namely the boat showdown in Eastern Europe and the balletic fight between Raiden and Vamp - overwhelm with their scale and linger long past the game's conclusion.

As a game successfully woven within a grander movie, "MGS4" ripens for criticisms geared at both mediums, including the rich body of theory birthed by film studies over the last century. I couldn't help applying one of those theories to one of the game's most lasting images: The female body.

Kojima's camera captures a lot of it: Naomi and Big Mama's wide cleavage, the Beauties' skin-tight camo suits and even Mei Ling's shapely Navy uniform. But the game derives its sexuality from more than just the female character design; it also stems from the prominence these characters' enticing features enjoy on screen. Several shots leave the females' heads out of the frame to focus on their curvy figures. Others, especially the post-boss battle Beauty shots, take stylized angles to accentuate the women's contours. Often the characters are animated in such a way that flaunts their bodies, even at the expense of the internal logic of the script. Mei Ling bends over to pick up her pointer, but then, for no apparent reason, she remains in that position - on all fours, her butt arched up - and continues briefing her crew as they stare.

Then there are the moments when Kojima enables the players' lascivious eyes. He gives them the options of leafing through the Playboys Snake uses to bait enemies and shaking the Sixaxis controller to jiggle Rose's breasts during codec conversations. In fact, the chests of almost all the females in the game improbably bounce at least once.

Kojima seems to go out of his way to ensure that his mostly male players will gorge themselves on sexual eye candy. Whether he intended to or not, this aspect of his authorship presents a striking example of the male gaze, a concept introduced by Laura Mulvey in her 1973 essay, "Visual Pleasure and Narrative Cinema." Mulvey suggested that film narratives often frame the action from the (heterosexual) male point of view and focus on them as the causative forces of that action, while females are traditionally pleasure objects relegated to the fringes of it. And perhaps the most noticeable visual trace of this cinematic trend is the camera's emphasis on the female body.

Whether "Metal Gear Solid 4" falls in line with the other tenets of Mulvey's theory is certainly worthy of debate - but another debate. For now, let's limit the discussion to the B-movie-degree prominence of female curves in Kojima's camera. There is precedent for this symptom of the male gaze in video games, both in Kojima's own series (Big Mama in "Snake Eater") and as far back as the NES days (when players could speed-run "Metroid" for a glimpse at Samus in a bikini). You could stick to the surface explanation that gamers are mostly male, like to look at females, and game designers know this. But what else does this persistent trait of video games say about the medium?

- From www.8bithacks.com, a new video game blog I'm co-authoring with some friends.