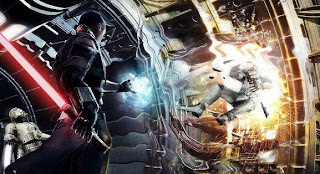 Since “Star Wars Episode III: Revenge of the Sith” concluded George Lucas’ film saga, a 20-year gulf between the original trilogy and its three prequels remained ripe for exploration.

“The Force Unleashed” bridges that gulf with a wholly original story centered around Starkiller, the secret Sith apprentice of Darth Vader. Under Vader’s tutelage, Starkiller ventures to the far reaches of the galaxy to finish off the last vestiges of the Jedi order decimated by the Emperor. But because of the Sith edict that only two may exist at a given time, Starkiller must keep himself a secret and destroy anyone — even Stormtroopers — who discovers him.

The canonical cut scenes benefit from a lifelike look and the absence of the recent three “Star Wars” films’ all-around hokeyness. The scenes are the highlight of an otherwise mediocre action-adventure game that gives players access to Force powers far beyond any Jedi mind trick. One of the highest points of hype for the game was a set piece in which Starkiller pulls a Star Destroyer out of the sky. In theory, there’s no way such an awesome act of near-omnipotence couldn’t be fun. But wielding that power doesn’t equate to enjoyable game play.

Players inhabit the walking iron lung that is Darth Vader in “The Force Unleashed’s” first level. As the Dark Lord of the Sith, they are free to Force choke Wookies, slay them with a single lightsaber slash or fling them off the high bridges over Kashyyyk’s forests. This experience forecasts Starkiller’s progression as he passes through each level and accumulates Force powers and combos.

But the game can’t steer clear of overpowering Starkiller with those powers and, in turn, demystifying them. The bulk of the game’s enemies can be defeated by whisking them into the nearest abyss with a touch of the “R2” button and an analog stick. If “A New Hope” shared this approach, Obi-Wan Kenobi would have dropped every Stormtrooper in the Death Star down a bottomless pit. Where’s the fun in that?

Players are free to make their own fun by creatively wiping out scores of Stormtroopers and other planetary natives. But they’re discouraged by leaden lightsaber controls that slow the pace of the battles and clunky dual-analog stick Force gripping that sucks the joy out of hurling droids and cargo containers at foes. Because of the poor targeting system, players may spend half their Force bar electrocuting an inanimate object instead of an attacking enemy.

The game’s faulty mechanics extend to the double jump, which sometimes staggers Starkiller in midair to mar any attempt at a precise leap across platforms. But he stops completely dead in the air if the player tries to attack, so any sort of diving strikes are out of the apprentice’s arsenal as well. Maneuvering Starkiller is further plagued by an inert camera that demands frequent manipulation.

The combat is slightly redeemed by the diversity of foes — some of whom can only be killed by a single attack style — and the inclusion of a dash button. The latter technique can lend battles a hyperkinetic feeling when Starkiller rushes through blaster fire in starship hallways or hurdles down a cavern chased by foes native to the fungal planet of Felucia. Hulking enemies like AT-STs and rancors can be finished off with fun quick-time events, as can the boss battles, which sometimes turn into technically lacking wars of attrition with fellow Jedi.

Hosting the action are a series of masterfully presented levels. The game’s oft-discussed three physics engines are evident in each swaying mushroom stalk on Felucia, each dangling tube of carbonite on Nar Shaddaa and each railway bent by the body of a flung Stormtrooper. “The Force Unleashed” boasts only a few skillful feats of level design — namely the vibrant passages through Felucia’s vegetation and the towering infrastructure of the game’s final level, which I’ll keep secret. But each environment is rendered in stunning detail and John Williams’ unmistakable score seals their magical aura.

Most fans of the films will find other small facets of “The Force Unleashed” to savor. In my case, it was the chance to stack AT-ST heads to reach high ledges and battle a few familiar faces in familiar locations.

But almost no “Star Wars” devotees will enjoy the downing of the Star Destroyer, which went from the game’s ultimate “wow” moment in previews to a nightmare of faulty prompts and annoying difficulty in reality. I found the lack of fun disturbing.