Unlike the adverts above, I did read your Blog, Dave.

Given the level of acting talent and fame among that list, does Leto really measure up, though? He's notable amongst the teen-magazine crowd, no doubt, but was he ever that well known of an actor, comparatively?

I don't think his level of fame is as relevant to the band's situation as the fact that a lot of the attention they attract is due to Leto's acting career. In that respect, I think it's fair to say that the band is as much an ooh-there's-an-actor-in-the-lineup band as any other.

It is an interesting point though; I think an example that doesn't measure up to that standard is Rilo Kiley, which has attracted a ton of attention by way of its musical strengths, while the former acting careers of two of the members serve as kind of an afterthought.
# posted by David Riley Wilcox @ 1:27 PM :: 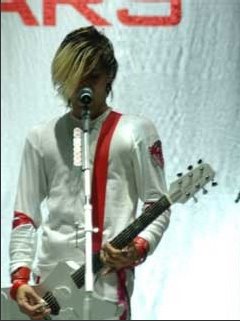 It seems Jared Leto (“Fight Club,” “Requiem for a Dream”) missed the memo when he formed 30 Seconds to Mars in 2002. Packing a walloping post-grunge sound coated in a waxy layer of electronic flourishes, the band’s self-titled debut generated considerable buzz amongst both music critics and modern rock fans. A tour with Incubus and a stint aboard Lollapalooza in 2003 bolstered both the band’s name and Leto’s credibility as a rocker. It appeared that the actor-turned-musician curse had been successfully defied.

Three years later, 30 Seconds to Mars returned with “A Beautiful Lie,” a decisive step backward for Leto and company. The singer/guitarist traded meditations on dystopia, transcendence, and personal growth for break-up songs delivered in an uninspired yet vogue “screamo” style (see first single “Attack”). Leto’s melodramatic delivery is all the more embarrassing given the utter banality of some of his lyrics. “This is the story of my life, these are the lies I have created” represents the extent of his soul-searching in “The Story. “The Fantasy” features a peculiar jungle-like call-and-response passage that begs to be excised from the otherwise decent song.

“A Beautiful Lie” boasts a few jewels scattered among the wreckage of the band’s squandered potential. “Was it a Dream?” is a catchy if obviously derivative child of the gloomy new wave of Depeche Mode and New Order. Beginning with a calming U2-esque guitar ambience, “From Yesterday” explodes into an ominous chorus propelled by Leto’s soaring vocals within a monumental canyon of guitars.

The album ends, however, with perhaps its most downright egregious track: a carbon-copy cover of Bjork’s “Hunter,” which serves no apparent purpose other than to exhibit Leto’s vocal chops. Though the actor can indeed sing and scream well enough to justify his excursion into the world of music, the Icelandic songstress is no standard against which to measure one’s voice and not expect to come out sounding like prey to “American Idol’s” Simon Cowell.

On Wednesday, September 7, 30 Seconds to Mars came to Club Tundra in support of their sophomore album, which was released a week prior. Leto’s reputation as a Hollywood hunk permeated the audience. One young female fan exclaimed, “He’s one of my favorite men – and I actually like the band, too.”

Opening with the faulty epic of a title track from “A Beautiful Lie,” 30 Seconds to Mars immediately seized the attention of much of their audience through sheer presence alone. The first few rows were occupied by members of the band’s congregation-like fan club, the Echelon, to whom Leto would later dedicate “Fallen,” a fan favorite.

As a frontman, Leto passes the muster. Though he despises associating his acting career with the band, he is not stupid enough to think people don’t make the association anyways. Thus he doesn’t carry himself on stage like the singer of a band trying to make a name for itself by desperately vying for the audience’s attention. Instead, Leto plays into the enigmatic aura his name carries with it while actively engaging the audience on occasion by introducing songs in the manner of a preacher, extolling their virtues and encouraging fans to follow the band’s ingenious philosophy of…not conforming. How bold.

Not surprisingly, the majority of highlights of the band’s set came during the songs from their self-titled debut. Leto circled the audience perimeter during “Buddha for Mary,” even engaging in an impressive balancing act atop the barrier separating the lower and upper floors. His being so up-close-and-personal inspired both fervent singing along and frenzied groping by many of the females in the audience.

Solid performances of “Capricorn” and “Edge of the Earth,” two of 30 Seconds to Mars’ strongest songs, both came early in the set, which weakened the three-song encore severely. The acoustic rendition of “Was it a Dream?” gave the females in the audience a chance to light up their cell phones and collectively wallow along with Leto’s honed pathos.

“Battle of One” and “The Fantasy” rounded out the performance. The former song, though generating the first mosh pit of the night through the song’s sheer intensity, was a late addition to “A Beautiful Lie” (due to leakage) for a reason made more obvious by Leto’s apparent indifference while performing it. Finally, performing “The Fantasy” enabled the audience to participate in the song’s primal call-and-response section. Even live, the passage still sounded awkward and unmotivated.

It remains to be seen whether 30 Seconds to Mars will reclaim their now-vacant throne atop the ugly mountain of failed bands that feature popular actors in their line-ups. Provided Leto can shed the insularity that deluded him into thinking “A Beautiful Lie” was anything but a spotty waste of potential, the band certainly appears to have the best chance. 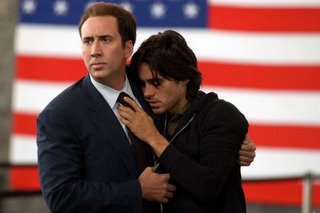 Kind of appalling. Can't decide whether to be a black comedy, a condem-nation of the arms industry/ government buyers, or an exploration of the downfall of a man who, personally, couldn't commit to the moral vacancy that he espoused as a businessman. Though it decently swerves between each, "Lord of War" is weakened each time its purpose shifts.

Ultimately, the key flaw of the movie is attempting to attract the audience to as morally reprehensible a character as Cage's. His eluding of Ethan Hawke is structured like a "haha, fuck THE MAN because I'm a gangsta" escape, and his opening statement to the audience - "1 out of 12 people in the world owns a gun. My question is: how can we arm the other 11?" - invites a Tony Montana-like fondness from the outset.

But when the audience stares down what Cage is escaping to - greasing the wheels of the war machine - they just can't reconcile their empathy with their disdain for him. Director Andrew Niccol invites the ambivalence with his opening sequence, chronicling the journey of a bullet from the factory floor to an indigenous boy's skull. Is a gun-runner absolved of the immeasurable damage his products do simply because he enjoys selling them and never uses them? The question is indeed compelling - well, maybe at first. But Orlov sees firsthand the lethal fruits of his labor and, quite clearly, is a plain greedy and despicable man, notwithstanding his transparent charms and moral ambiguity. His losses - personal and monetary - do not inspire sympathy but more contempt and disappointment when they fail to deter him from continuing his deadly trade.

Still worse is Cage's defense - one of absolute recrimination of both governments and car/tobacco dealers, and deferral of guilt to the people that actually fire his products. In this respect the film attempts to adopt a political consciousness by depicting governments as the greater of two evils. Especially at film's end, it works, but not nearly enough to exonerate our protagonist to the point of actually, you know, liking him.

Bridget Moynahan passably fulfills the role of the wife who just doesn't wanna be lied to anymore, goddamnit, while Jared Leto's antics as the fuck-up younger brother are adequate comic relief. The coke-outline of Ukraine was a definite hoot. Ethan Hawke, sporting the righteous fury of a by-the-book Interpol agent pursuing Orlov, provides the moral yardstick against which Cage just crumbles into ash and goes straight to Hell.

I enjoyed the scene where the Liberian dictator shot Cage's competitor (a business-as-usual Ian Holm). Excellent, if slightly obvious metaphor for Cage's Eichmann-esque philosophy about gun-running. The shot of Cage chatting on his cell phone while sitting on a toppled statue of Lenin against the backdrop of an endless row of Russian tanks was another delight.